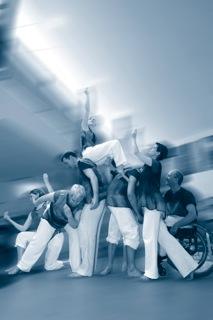 'Suspension'. A composition for a project with Crossover Intergenerational Dance Company and Sospiri Choir, Oxford

An original composition for 9 part choir to accompany a new, site specific piece by Crossover at the Bridge of Sighs in Oxford (2009) and the Old Fire Station, Oxford (2012)

The first phase of this project was a performance as part of the annual Oxford Dance Festival, ‘Dancin’ Oxford’, under the Bridge of Sighs in the centre of the city. Added to this was the collaborative aspect with the dancers, whose site-specific choreography was based on the music and the architecture surrounding them.

The second phase of the project was in 2012 after receiving funding from the BBC to record the piece and perform it at the Old Fire Station, Oxford.